On March 6th, 2022, after persistent effort along with a rigorous registration, appraisal, evaluation, and application process, the Journal of Asian Business and Economic Studies (JABES) of the University of Economics Ho Chi Minh City (UEH) has now been officially indexed in SCOPUS. Concomitantly, JABES has become the first Vietnamese journal in the field of Social Sciences & Humannities, Business and Management to be recognized in this prestigious academic index. This is an outstanding step contributing to UEH’s roadmap towards becoming a university with a high academic reputation and sustainable action in the region in particular and contributing to enhancing Vietnam’s identity in international academic forums in general.

With more than 31 years of persistent, efforts of the JABES and their community as well as internal support from UEH, and the Ministry of Education and Training, JABES has reviewed the standards, making continuous improvement with the goal of being indexed in SCOPUS List. The process of applying for indexing in SCOPUS officially starts on November 5, 2021, after completing the required documents. After more than 4 months, on March 6, 2022, JABES has received the Official Notification Letter regarding being indexed in the SCOPUS List. 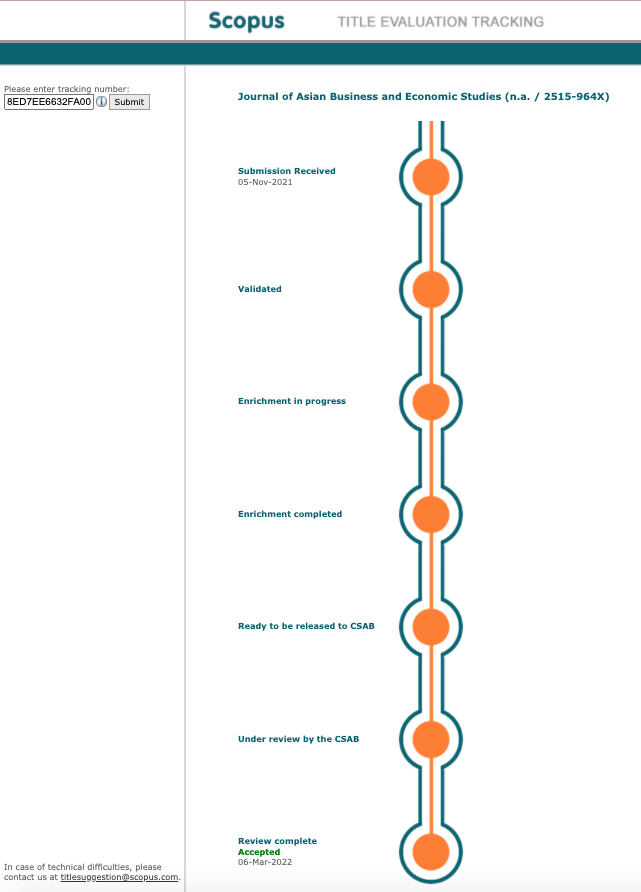 SCOPUS, launched in November 2004, is owned by the prestigious international publishing house Elsevier (Netherlands). To be covered in the SCOPUS list, all journals must pass a rigorous evaluation and selection process from Scopus Content Selection and Advisory Board. The evaluation process relates to important contents as International diversity, Editorial Board and authors, article quality, number of citations, Journal publicity policies, etc. The evaluation process of SCOPUS journals is also dependent upon the Impact factor. Besides, the content on the website of SCOPUS (http://www.scopus.com) is very useful for various purposes from searching documents to assessing the scientific research status of individuals and institutions training, research, and so on.

JABES has now covered in the SCOPUS index and this has been a part of UEH’s goal of internationalizing and strengthening the academic reputation; thereby, increasing the scientific reputation, affirming the publishing quality, and enhancing the recognition in the domestic and international academic community of JABES in particular and UEH in general globally; concurrently, it helps to expand the scientific network with scientists and spread knowledge.

This achievement has been a process of persistent efforts full of internationalization aspirations from generations of UEH leaders and those of Journal leaders over the past 31 years. Both UEH leaders, lecturers, researchers, a network of national and international scholars to the authors, reviewers, and the community of JABES editors and collaborators has always strived to achieve to internationalize goal of JABES; and together marked an important turning point as JABES has become the first prestigious international journal in Vietnam within the Social Sciences&, Business and Management field to join SCOPUS. This result has been effectively steered and supported by the Ministry of Education and Training (MOET). Highly appreciated to JABES Upgrading Projects from 2012 until now with two funding phases by MOET in associated with powerful and efficient resource investment from UEH have contributed efficiently to the JABES success.

JABES – Over 31 years of development and integration, towards being recognized on international academic networks

JABES is a scientific journal in the field of economics and business and has two versions: English version (JABES-E) published 4 issues/year on the system of Emerald Group Publishing and Vietnamese version (JABES-V) published 12 issues/year by UEH. Research articles submitted to JABES must pass a rigorous peer-reviewed process to ensure standards and improved academic quality of scientific articles. Since its official presence on the Emerald Group Publishing System’s database (May 2018), JABES-E has published 12 issues with 72 research articles from 162 authors from more than 30 countries around the world, in which, foreign authors account for more than 75%. JABES has an annual acceptance rate of approximately 12% – a relatively highly selective indicator of scientific quality in each review stage. The entire review and approval process for an article takes around 190 days.

Up to the fourth quarter of 2021, JABES-E has an approximately Citescore index of 4.46 (the number of citations/the number of articles published in 2018– 021 period), in which, the 4 sub-categories (Finance, Economics and Econometrics, Business and International Management) are in the highest percentile (Q1). Currently, JABES has strived to maintain a steady level of influence and citation in the scientific community.

JABES has had more than 31 years of establishment and development with diverse achievements.

Along with the greatly impressive efforts of the Editorial Board, Advisory Board and the Associate Editors over many periods, JABES has had great and significant milestones for the standardization process in accordance with international standards as follows:

These important steps in the JABES assisting process ensure eligibility to be ranked in the SCOPUS journal system in March 2022.

Over the period of 2021–2022, JABES has accelerated and implemented a series of activities to enhance internationalization and identity on academic forums listed as: Successfully organizing The 3rd Asia Conference on Business and Economic Studies  (ACBES 2021) with a fully online platform to cope with the context of the COVID-19 pandemic; periodically organize a series of scientific seminars called JABES Seminar Talk (JST) with the participation of high reputed Professors as known as Editor-in-Chief of A and A* Ranked International Journals (or influential researchers in the international scientific community) to introduce promising research trends.

Joining SCOPUS is one giant step, contributing to UEH’s roadmap towards becoming a university with an academic reputation and sustainable action in the region in particular and contributing to enhancing Vietnam’s identity on academic international forums in general. Nevertheless, maintaining and developing the quality of JABES at higher rankings in the near future will be the upcoming challenge for the whole JABES team on this journey. Therefore, continuing to maintain professional rigor, ensuring compliance with publishing ethics, covering in ABDC, ABS, ERIM list in order to enter other important indexes and so on are the upcoming targets of JABES. In addition, JABES will focus on key research areas listed as sustainability and economic development to further contribute to national, regional, and global science.

UEH College of Economics, Law and Government – A year looking back on our founding imprint and operating journey

UEH College of Economics, Law and Government – A year looking back on our founding imprint and operating journey

UEH And Kwangwoon University, Korea Signing A Cooperation Agreement On The Development Of “City To City” Project

Agreement Signing Ceremony Between UEH And University Of Newcastle, Australia

UEH Announcing The Results Of The National Entrance Exam Into Universities In 2022: A Diversity Of Attractive New Training Majors With Increasing Targets And Stable Benchmarks

UEH Holds The 1st Doctoral And Master Graduation Ceremony In 2022

UEH Community Knowledge Dissemination Program: More Than 30 Research Topics And Applied Knowledge Will Be Deployed In 2021, Continuing To Move Forward In 2022

“Innovation and Advancement in Business in 2022” International Conference

UEH Collaborated with the Department of Education and Training Vinh Long on Organizing the Conference “Sharing Experience of Online Teaching; Sharing and Transferring Online Lesson-supportive Tools for Elementary, Middle, and High Schools”

JABES – A 30-Year Journey Of Development And Integration

The Synergy Of A Multidisciplinary University

UEH Special Issue: Towards a Multidisciplinary and Sustainable UEH University